A figure familiar to the people of Letchworth, Richard Clare, known affectionately as ‘Allweathers’, is a fascinating character. After decades playing double bass for jazz and blues bands, in the UK and Spain, Richard settled down in Letchworth to focus on his painting practice. A visit to the artist’s home studio tells a story of a passionate outsider artist producing intensely personal and psychological expressionist paintings. With walls painted in intense reds and oranges, collections of African masks, clown dolls, ancient bibles and books on Art History covering every surface that isn’t taken up with records and musical instruments, entering Allweathers’ home gives an insight to the mind of this impassioned and talented artist - all of which may come as a surprise to those who only know him as the local road sweeper.

KD: Richard, what first got you interested in becoming an artist?

RC: I was already a painter...I worked as a painter and decorator in Cambridge. This was in the early ’90s and, looking back, I can see the beginnings of my interest starting then. I like to paint strange shapes on the walls before they got painted over properly. The thing that sparked it off was getting my hands on a Jackson Pollock biography. His famous abstract works appealed to me as I saw the freedom of expression in them, but I was equally into his early, lesser known, figurative paintings. I think that balance between abstraction and representation, the imagined and the real, is still there in my work.

KD: Other than Pollock were there any other artists that influenced your work?

RC: I met another American abstract expressionist, Esteban Vincente, just before his death in 2001 and loved his colourful paintings. I also had the honour of meeting Alan Davie, who had close ties with Hertfordshire. I’m a great fan of Jean Dubuffet who founded the Art Brut movement and celebrated ‘low art’. He didn’t care about traditional standards of beauty and, as such, his work looks more authentic, more real to me. It’s something I strive for in my own painting. Like Dubuffet, I’m also influenced by what you might call Outsider Art, particularly the Prinzhorn Collection of Art by Mental Patients, a collection that also influenced artists like Max Ernst and Paul Klee.

KD: Jazz was a major influence on Pollock and the abstract expressionists and Alan Davie was a jazz musician himself, so it comes as no surprise that you too played in several jazz bands yourself over the years.

RC: I played double bass in various bands for over 20 years, playing in the UK and Europe. Music is still a big part of my life* but I stopped playing professionally around 2010 to concentrate on painting. Before then I’d also been busking around Spain but eventually decided I’d taken it as far as it could go, packed up, and moved to Letchworth. All throughout that time, I’d keep a hand in with art, if you took away my instrument, I’d just pick up a pencil - always creating something. I loved playing music but, for now, painting is enough.

* At this point, Allweathers pulled out a guitar and sang an original song that was so good I felt compelled to record it on my phone.

KD: The title of your exhibition at the Broadway Gallery is ‘You Left the Door Wide Open All Night’, what does this refer to?

RC: It was something my mum said to me. I’d got home late and forgotten to close the front door, never mind lock it. I obviously felt bad about it as its stuck with me all these years but now I see it as a metaphor. It’s about me having an open mind, the doors being the doors of perception...and I’ve left them open all my life.

KD: Most people in Letchworth will recognise you from your day job as a road sweeper. Does the job, or the things you see in daily life, ever find itself seeping into your work?

RC: Road sweeping is a job that suits me. I don’t want the stress that comes with other jobs, I prefer to work outside, hence my nickname, and like that, in some way, I’m helping the environment by doing it. It doesn’t directly influence my work, but it does allow me time to think and devote my headspace to the other world in my paintings. It's an old joke but, one way or another, I’ve always got a brush in my hand! 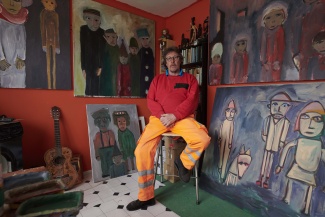 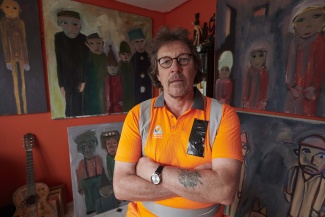